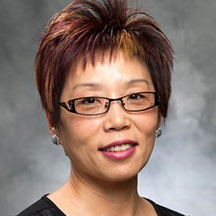 Dr. Hong Yu is an Associate Professor and Interim Director of the Ted Rogers School of Retail Management. Prior to joining Ryerson in 2004, she was on faculty at Oklahoma State University. Since 2005, she has served as a Visiting Professor at universities in the Greater China Region. Dr. Yu has taught in Ryerson’s MBA program and supervises the Major Research Papers. She has completed 13 funded research projects and published 48 academic papers in peer reviewed international journals and conferences since 2001. She co-authored a paper that won “Best Paper Award” in Europe and was the lead-author of a visual merchandising program that received “Education Technology Award” in the U.S.

Dr. Yu was a Consumer Scientist at Maytag Appliances in the U.S. before entering the academic field.   She has also served as a consultant for retail design and fashion companies on their visual merchandising, branding, and international expansion strategies.