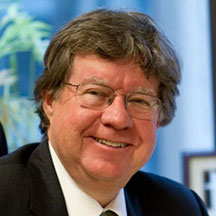 Ken Jones served as the dean of the Ted Rogers School of Management (TRSM), from 2005 to 2013. Under his leadership, was transformed into what Ken proudly calls “Canada’s most connected business school with a focus on relevant, entrepreneurial, career-based education.

Ken joined Ryerson as a professor of geography in 1970. He specialized in business geomatics, geo-spatial analysis and marketing geography and in 1992 founded the Centre for the Study of Commercial Activity (CSCA). Through his energy and vision, he built CSCA into an internationally renowned home for research, information and analysis about Canada’s commercial and retail industries.

Ken has published extensively throughout his career and has had numerous appointments and memberships in the academic, business and government sectors. He was awarded the NSERC/SSHRC Chair in the Management of Technological Change in Retailing from 1996 to 2006 and held the endowed Eaton Chair in Retailing from 1995 to 2005 and oversaw the Ontario Retail Sector Strategy in the mid-1990s.  He served as chair of Geography from 1987 to 1991. His awards include the Sarwan Sahota Distinguished Scholar Award in 2000 and the Errol Aspevig Award for Outstanding Academic Leadership in 2012, the Arbor Award from the University of Toronto, and Canadian Association of Geographers Award for Service to Business and Government.

During his term as dean, the Ted Rogers School of Management experienced significant growth in a host of areas: an increase in the number of tenure stream faculty members, an expanded and growing list of student clubs and associations, more research centres and an increase in the total amount of research funding.  Ken has also prompted the launch of three graduate programs, the establishment of undergraduate programs in Real Estate Management and the establishment of a School of Accounting and Finance.  One major milestone came in 2012 when the TRSM joined an elite group of business schools around the world with its accreditation by the prestigious Association to Advance Collegiate Schools of Business.

Upon retirement, Ken has focussed his attention on the development of an academic leadership program at the Ted Rogers School of Management and currently serves on three non-for profits boards.