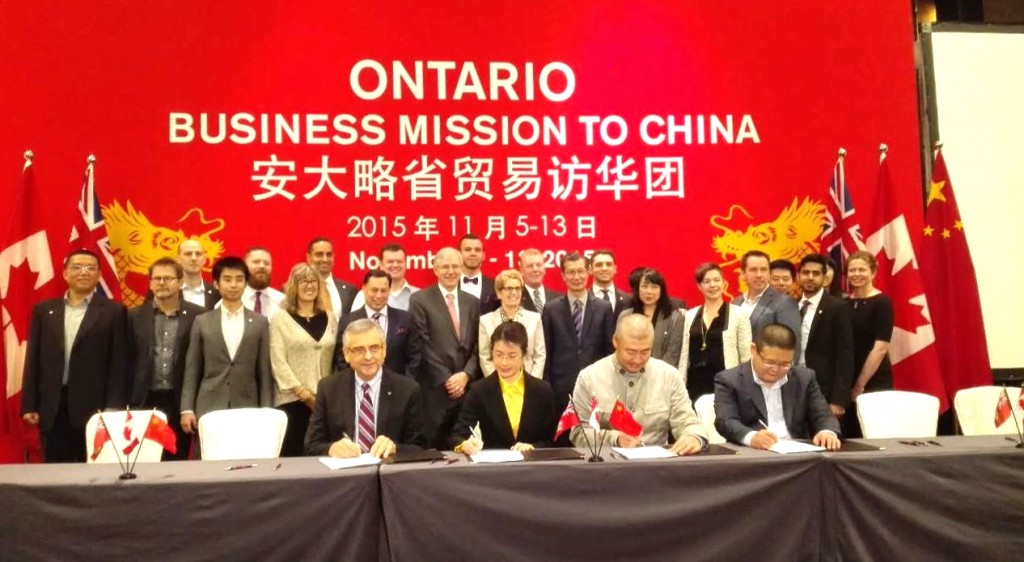 From November 5-13, 2015, Ontario Premier Kathleen Wynne led her second mission to China in Beijing, where 38 new agreements valued at $750 million were signed by delegates. This brings the estimated total value of agreements from the mission to $2.5 billion. The agreements are expected to create 1,700 jobs in Ontario.

Ryerson University played an integral role in promoting research partnerships and international exchanges between Ontario and China. CCIBD’s Howard Lin has played a mentor role to Mr. Lu and Mrs. Zheng, the founders of Wing On New Group Canada Inc. who signed several partnership agreements (more than $300 million) during the mission to export Canadian food and nutritional products to China. These two Toronto-based immigrant entrepreneurs spoke at the CCIBD’s Conference on Chinese Immigrants Doing Business in Canada that took place on September 12, 2015.

Wendy Cukier, Vice-President of Research and Innovation at Ryerson, and Jian Gao, Senior Associate Dean of the School of Economics and Management at Tsinghua University, agreed to further collaborations on research and student exchange between the two universities.

Overall, 11 Ontario universities participated in the mission, visiting 10 universities in 5 days, as well as research parks and incubators.  Premier Wynne describes the mission, and particularly the role of universities, as essential for growing Ontario’s place in the global economy.“International partnerships are a critical part of the education landscape in Ontario. By working with universities in other countries, like China, we are turning out graduates who can compete and prosper in today’s global economy and ensuring our universities remain among the best in the world,” she said.“That’s good for students and it’s good for our province. I applaud the leaders in our postsecondary sector who are working so hard to ensure Ontario has a bright and prosperous future.”China is one of Ontario’s largest trading partners, and the largest source of the province’s international students.

For more information on the mission, please visit: https://news.ontario.ca/opo/en/2015/11/premiers-china-mission-generates-25-billion-in-agreements.html