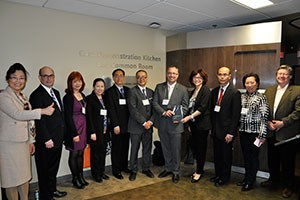 Dean Steven Murphy, CCIBD board members, and guests with Dr. Shuguang Wang at his book launch on April 23, 2014.

On April 23, 2014, CCIBD hosted a book launch event for the newly published book China’s New Retail Economy: A Geographical Perspective , written by Dr. Shuguang Wang, Professor of
Geography and a member of the CCIBD Board. The event attracted more than 50 people, including Ryerson faculty and students, representatives from key organizations such as the Canada
China Chamber of Commerce and the Canada China Business Council as well as entrepreneurs from the Chinese community in the GTA.

The master of ceremonies was the Honourable David Dingwall, a former Cabinet member of the Parliament of Canada and current co-director. Dr. Steven Murphy, Dean of Ted Rogers School of Management delivered the welcoming remarks, praising CCIBD’s effort in promoting mutual understanding between Canada and China. Dr. Ken Jones, Dean Emeritus and CCIBD’s co-chair of the Advisory Board introduced Dr. Shuguang Wang and his scholarly journey at Ryerson. Dr. Shuguang Wang then presented the major themes of his book.