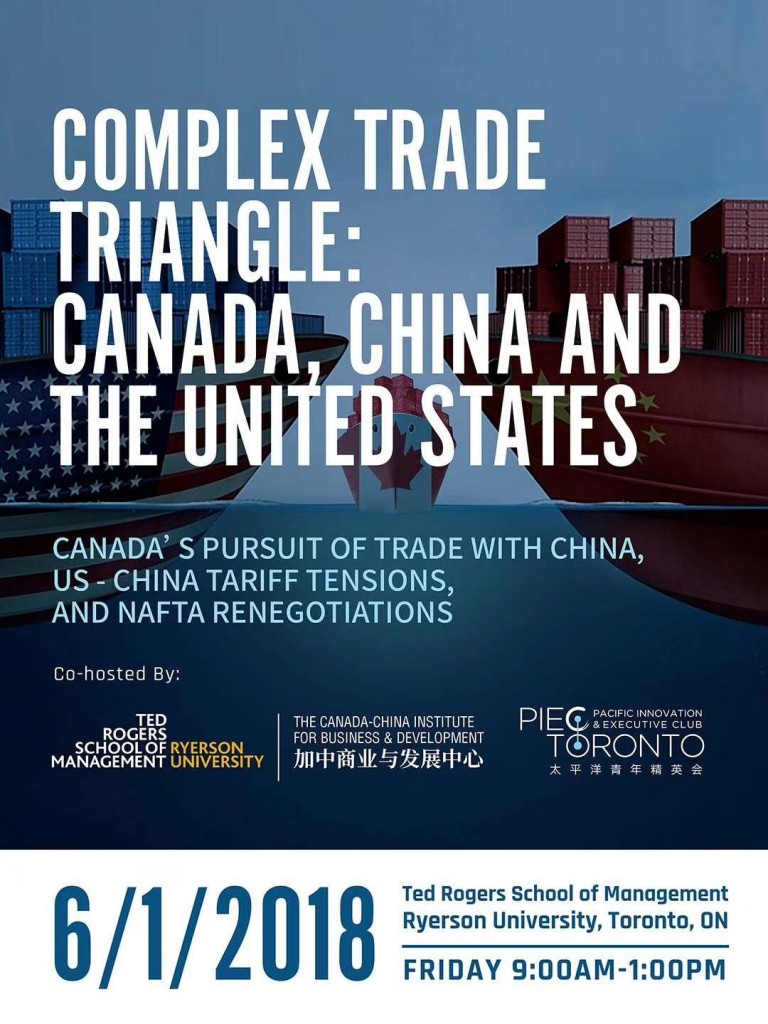 For Canada, China and the United States, the current trading environment remains complex – riddled with uncertainty and risk. Three intertwined aspects stand out:

The Canadian Government, through its 2018 Budget, has emphasized the importance of developing stronger bilateral trade relations with China – noting that a doubling of trade between Canada and China by 2025 remains a mutually shared vision. Canada has committed to strengthening the pursuit of that vision in concrete terms by budgeting $75 million (to be spent over the next 5 years) for Global Affairs Canada to be used in advancing Canada’s trade agenda in China and the rest of Asia.

The recent exchange of unilaterally imposed tariffs between the United States and China is a reminder to Canada that a trade war between its two largest nation trading partners (i.e. China and the US) could have significant repercussions. Understanding the relationship between China and the US is critical for Canada.

Although Canada remains a close ally of the United States, the protectionist trade stance recently taken by the United States on many fronts may raise Canadian apprehension about the direction of future US – Canada trade relations.

At this event, experts from policy/research institutes, academia, and the business community will discuss their insights on the three aspects mentioned above and how they are intertwined – with a view towards developing suggestions on what might be the best way forward.

Some of the distinguished speakers include:

Dr. Wang’s professional experience includes working as an official for Ministry of Foreign Trade and Economic Cooperation in China, Director for Asia of SNC-Lavalin and Vice President for AMEC-Agra in Canada and also served as the Chief Trade Representative for Quebec Government Office in Hong Kong and China. He is currently on the Migration Advisory Board of International Organization of Migration (IOM), a Policy Fellow of Institute for the Study of Labour (IZA), a member of Yale University Asia Development Council, a member of advisory board of Richard Ivey School of Business in Asia, a Steering Committee Member of Metropolis International and an advising member to the board of Association of Executive Search Consultants in New York. He is also a frequent speaker at different international forums and often interviewed by various influential media.

Throughout his career as an educator and venture capitalist, Dr. Jim de Wilde has focused on the issues of global competitiveness and the commercialization of knowledge through activities in both the private sector and the public sector. Since the early 1990’s, Dr. de Wilde has also been involved in venture capital activities as President of JdW Strategic Ventures. In these venture capital activities, Dr. de Wilde currently serves on the Investment Committee of iNovia Capital in Montreal and the Advisory Boards of Enertech Capital (Philadelphia) and Walsingham Partners in Toronto. Dr. De Wilde is also the curator for the annual Waterloo Innovation Summit at the University of Waterloo and lectures at Rotman on Venture Capital strategies (MBA) and Global Capital Markets and New Trends in International Political Economy

He has a Ph.D. in political science from McGill with a dissertation focusing on the Canadian public policy process and competitiveness in technology sectors.

Guests from Asian Pacific Foundation (APF), Toronto Region Board of Trade (TRBT), and The Consulate General of PRC in Toronto will also be joining us at the conference.