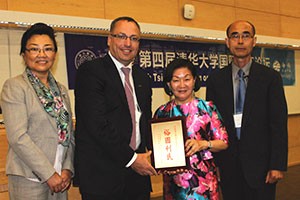 “Overseas Chinese Entrepreneurship: Theory and Practice” was the theme of the Fourth Tsinghua Forum on Overseas Chinese Studies, hosted by the Canada-China Institute for Business & Development (CCIBD) on June 8, 2014 at Ryerson’s Ted Rogers School of Management. The first three Tsinghua Forums were all held at Tsinghua University in Beijing. This was the first time the Forum was held outside of China and was also the first time a practitioner /entrepreneur component was featured in the Forum’s program.

Liu Tee Shu (second from right), president of the Flushing (New York) Chinese Business Association, and a recipient of an Elis Island Medal of Honor (USA), presents a certificate of recognition to Steven Murphy (second from left), dean of the Ted Rogers School of Management (TRSM) at Ryerson University; Howard Lin (right), professor and co-director of the Canada-China Institute, TRSM; and Dr. Guan Jian (left) at the Fourth